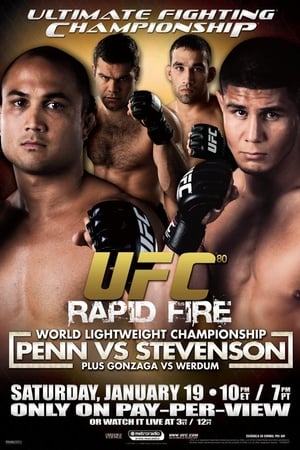 Movie: UFC-80:-Rapid-Fire-(2008)[0013085] UFC 80: Rapid Fire was a mixed martial arts (MMA) event held by the Ultimate Fighting Championship (UFC), that took place on January 19, 2008 at the Metro Radio Arena in Newcastle, England. Sean Sherk was originally slated to fight but tested positive for steroids. With the lightweight championship vacated, the Penn-Stevenson bout was altered to be for the undisputed championship.

UFC 82: Pride of a Champion