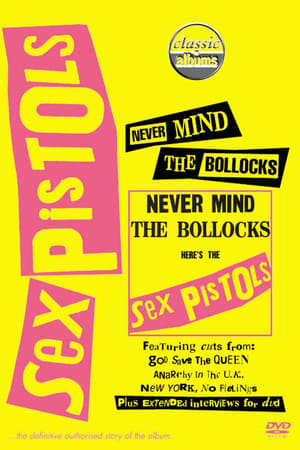 Movie: Classic-Albums:-Sex-Pistols---Never-Mind-The-Bollocks,-Here's-The-Sex-Pistols-(2002)[0037756] The Sex Pistols album Never Mind The Bollocks Here's The Sex Pistols is unquestionably one of the most important musical statements in the history of British music. It was in 1977, at a time when the nation was crippled by class division and unemployment that four working class teenagers with supposedly non-existent futures recorded an album that to this day remains as one of the greatest and most influential bodies of work ever recorded. This documentary features exclusive interview's with all four of the original members of the Sex Pistols as they take you on a track by track look at the making of the album. Featuring Steve Jones and Glen Matlock demonstrating selected riffs and licks off the album and explaining the development of the song writing. Candid interviews with Malcolm McLaren, Chris Thomas and Bill Price set the record straight about the recording session. Intertwining additional rare home video, live footage and early demo's make this release a compelling must see.

The Comedians of Comedy: Live