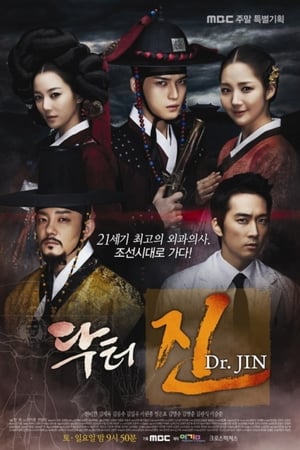 TV Series: Dr.-Jin-(2012)[45940] Dr. Jin is a 2012 South Korean historical television drama series, starring Song Seung-hun in the title role of Dr. Jin, a 21st-century neurosurgeon who travels back in time to the Joseon Dynasty. Also starring Park Min-young, Lee Beom-soo, Kim Jaejoong of JYJ and Lee So-yeon, it aired on MBC from May 26 to August 12, 2012 on Saturdays and Sundays at 21:50 for 22 episodes.Based on the Japanese manga series Jin written by Motoka Murakami, the series is the third television adaptation of the manga following the Japanese television drama JIN, starring Takao Osawa which aired on TBS in 2009 and its sequel in 2011. "Revamped with Korean sentiment," the setting was changed from the original's Edo period to the Joseon Dynasty, during the reign of King Cheoljong of Joseon, and real-life Japanese historical figure Sakamoto Ryoma was replaced with Joseon political figure Lee Ha-eung.The early working title was Time Slip Dr. Jin.