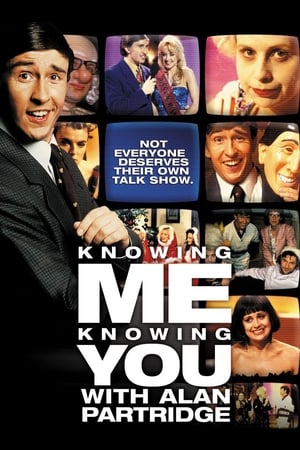 TV Series: Knowing-Me-Knowing-You-with-Alan-Partridge-(1994)[960] Knowing Me Knowing You with Alan Partridge is a BBC Television series of six episodes, and a Christmas special in 1995. It is named after the song "Knowing Me, Knowing You" by ABBA, which was used as the show's title music.Steve Coogan played the incompetent but self-satisfied Norwich-based host, Alan Partridge. Alan was a spin-off character from the spoof radio show On the Hour. Knowing Me Knowing You was written by Coogan, Armando Iannucci and Patrick Marber, with contributions from the regular supporting cast of Doon Mackichan, Rebecca Front and David Schneider, who played Alan's weekly guests. Steve Brown provided the show's music and arrangements, and also appeared as Glen Ponder, the man in charge of the house band.The show was a parody of a chat show. It featured a live audience whose laughter meant that viewers could not mistake the show for a real chat show. Alan went on to appear in two series of the sitcom I'm Alan Partridge, following his life after both his marriage and TV career come to an end.

That Mitchell and Webb Look